This urban farm is on path to sustainability 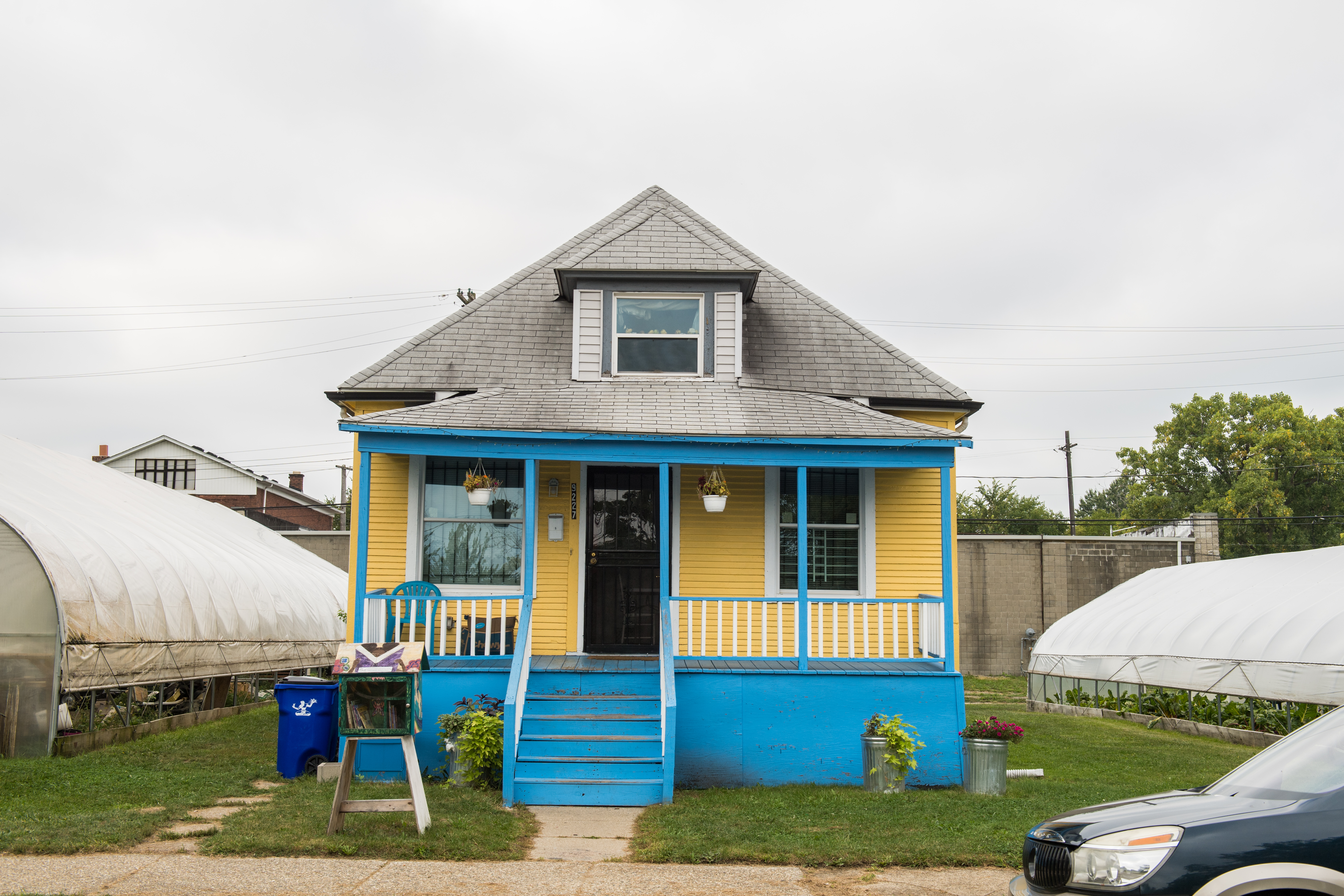 Standing on a path of broken concrete, dirt and grass, Anya Sirota stops. It doesn’t look like much, but in Sirota’s view, the footpath has a big part to play in the future of the Oakland Avenue Urban Farm in Detroit.

The pathway was the alley between two streets of houses and many vacant lots. It took Sirota and her team two weeks to make it passable.

“There was about two feet of sediment that had accumulated for years. You couldn’t see the drainage. You couldn’t pass,” she said. 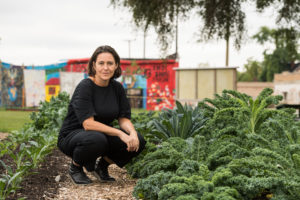 Sirota, an associate professor of architecture at the University of Michigan Taubman College of Architecture and Urban Planning, and her partner, Jean Louis Farges, run Akoaki, a design studio in Detroit. The team has been working with the urban farm for nearly four years to develop a vision and “guiding plan” to make it self-sufficient and sustainable.

It’s a big, unprecedented project with several moving and interwoven pieces, and it’s taken years of research and a lot of outside help to get this far. Plans for the farm’s future include a new focus on cash crops, an orchard, a store with an events and job-training space, an outdoor performance area, rentable space for visitors and an international design library.

In the process, they hope to also create a model for how architecture can help community-led urban agriculture work elsewhere—in Detroit and beyond—to both drive economic growth and create a civic commons for residents in places where poor planning and other institutions have failed them.

Depending how you count, there are an estimated 1,300 urban farms in Detroit, ranging from single-family garden plots to several-acre operations.

Sirota estimates it will take at least three or four years and $2.5 million to complete the vision, including the implementation of an irrigation system to get rain water to the crops—a job all currently done by hand. Much of the work to date has been less noticeable on the surface. Like the alleyway, which Sirota says will one day serve as the main pedestrian access between the farm’s many programs. 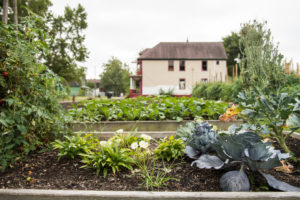 “There are things here on the farm you would never notice as being significant,” she said. “This was really a point of pride, to be able to walk down this alley.”

Tracking down who owned the land being farmed was its own challenge in the beginning. As Akoaki became more involved in Detroit’s North End and the Oakland Avenue Urban Farm, Sirota and her partners realized not only how valuable it was to the community, but also the high risk that a buyer could purchase the land out from under it.

Like many of Detroit’s urban farms, it was started on land that didn’t belong to the farmers—land left vacant from blight remediation that, during the Great Recession of 2008, local residents couldn’t imagine having any real value or be targeted for speculation.

The land and infrastructure the farm had invested several thousands of dollars into could be purchased at auction from the Detroit Land Bank Authority for just a few thousand dollars. Today, all of the vacant land on the farm footprint has been purchased, thanks to impact investors and grants from the Kresge Foundation and ArtsPlace America, secured with the help of Akoaki.

The 10-year-old, six-acre farm was founded by Jerry Hebron to be a stabilizing presence in the neighborhood and a much-needed source for fresh food, and it has been both. The farm and its “Yellow House” headquarters have become a sort of commons and a regular meeting place for different community groups.

The most tangible part of the business plan estimates the farm could generate more than $280,000 in annual revenue by focusing on cash crops and micro greens to be sold in addition to heritage crops already grown and enjoyed by residents. That estimate is based on a business plan developed by students from U-M’s Ross School of Business under the direction of Associate Dean Bill Lovejoy. 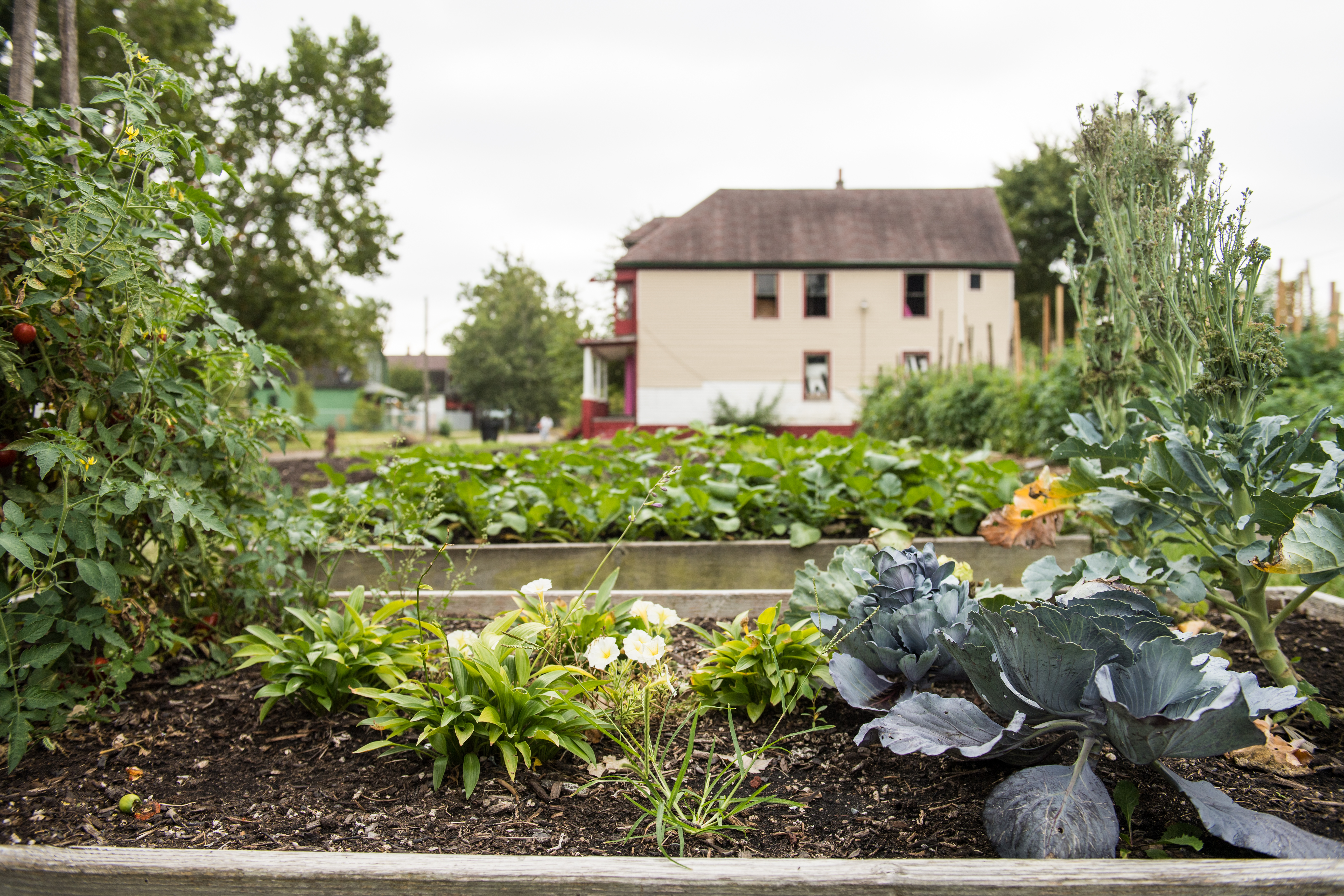 The Oakland Avenue Urban Farm is on it’s way to self-sufficiency. A plan created by Anya Sirota, a University of Michigan associate professor of architecture, and her partner, Jean Louis Farges, have spent more than four years working with the farm’s founder Jerry Hebron. A business plan developed by students from U-M’s Ross School of Business estimates that the farm could generate sustainable revenue by growing cash crops and microgreens to sell alongside heritage crops already grown and enjoyed by residents. Image credit: Michigan Photography

Other programs are less of a sure thing at this time. For instance, the construction of a standalone rental space on top of the store to be used by visitors could help offset costs of running the store. And each year, the farm draws around 2,000 visitors: interns, eco-tourists, foreign academics and school groups who arrive by the busload. Sirota says many of these people stay at hotels downtown, when they could be renting a bed at a hostel on site. But will they? 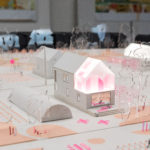 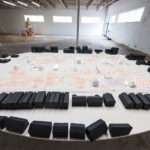 Other aspects of the plan are easier to test, such as a performance space or art gallery. The farm has hosted a series of successful pop-up art events and one-time music and theater performances that have drawn hundreds of people.

Every piece of the ambitious project—down to each individual tree—is mapped out on a scale model kept inside the future store, with colorful drawings on the wall nearby showing viewers what could be, while carefully considering who and what is already there.

Sirota admits she’s not a farmer or a landscape architect, but a tour of the farm and discussion of the different programs reveals architecture’s many roles—from advanced rooftop rain collectors to efficiently irrigate crops without expensive city water, to new build material prototypes that will help absorb heat in hoop houses to extend growing seasons, to conscious efforts to be good neighbors to existing residents with careful landscaping.

Whether or not every project comes to fruition, it has also helped start a conversation with Detroit’s Planning Department that could have lasting effects for it and other grassroots efforts at local land stewardship, Sirota says. Thanks in part to the plan being proposed, the Oakland Avenue Urban Farm is one of two test sites being considered where the city would rezone all of the parcels at once, making the farm’s future even more secure.

In June, the farm acquired the former home of the historic Red’s Jazz Shoeshine, a cultural landmark in Detroit’s historic North End, which has been documented in Aretha Franklin’s biography and the Eddie Kendricks song “Shoeshine Boy.” The hope is to restore the blighted building and reopen it in the next year.

Keeping that connection to the neighborhood’s history is important to Sirota. She says hearing stories about Oakland Avenue’s once lively entertainment district, and then driving down it today makes for a sharp contrast.

“That was the spine. That was the hot urban artery,” Sirota said. “That’s where people used to come for entertainment, fashion, social experience. We’re a bit distanced from that now. But in that space between the imaginary and the real is where we’re looking to insert our architectural aspirations.”