Blue Sky: Up to $10M toward research so bold, some of it just might fail

Artificial photosynthesis that’s 10 to 100 times more efficient than plants for a sustainable vehicle fuel. A machine-learning-based approach for making “nanobiotics” to fight drug-resistant bacteria. New ways to take carbon dioxide out of the air and turn it into useful products. And designs for urban water systems that harness the microbial communities that live in our water pipes, our rivers and our bodies.

With these four research projects that address some of society’s biggest threats, Michigan Engineering launches the Blue Sky Initiative—a $10 million funding program encouraging high-risk, high-reward work. Each team can receive up to $2.5 million over three years.

The initiative is part of the University of Michigan College of Engineering’s new internal research funding approach that’s based on a startup investment model. It’s designed to give research teams a chance to try big, daring ideas, show results and build enough momentum to secure significant investment from partners such as federal agencies or corporations. On the other hand, the teams may find they overshot, and their experiments fail. College leaders are prepared for that outcome, too.

“These are all ideas that could change the world—no less,” said Alec D. Gallimore, who is the Robert J. Vlasic Dean of Engineering, the Richard F. and Eleanor A. Towner Professor, an Arthur F. Thurnau Professor and a professor of aerospace engineering.

“We’re talking about antibiotic resistance, aging water infrastructure and shifting population centers, climate change and sustainable energy solutions. These are some of the toughest problems we face as a 21st century society. If we want to solve them, we need to step outside our comfort zone, and that’s what we’re doing with Blue Sky.”

In one of the initiative’s nods to startup company investment, project leaders had to agree to meet certain milestones and have regular check-ins with program managers. If a project isn’t progressing, it may not receive its next installment. This is intended to encourage conversation about realistic outcomes and to provide an opportunity to reinvest resources elsewhere if a particular endeavor isn’t going as expected.

“Fundamentally this is a culture change exercise,” said Steven Ceccio, the Vincent T. and Gloria M. Gorguze Professor of Engineering, associate dean for research at Michigan Engineering and one of the program founders. “When it comes to high-risk, high-reward ideas, we want our faculty to make that leap of faith, even if there is a chance they may fall. Our research culture should encourage and support intelligent risk taking.”

Both programs were designed to encourage bold ideas and serve as complements to traditional research funding models. Traditional approaches typically require proofs of concept and preliminary data, which can make it difficult to get funding for daring ideas.

“The traditional U.S. research funding system works well and it has for a long time,” said Mike Drake, senior director of research relations at Michigan Engineering. “But we’re aiming to broaden our risk profile. U-M is one of the largest academic research enterprises in the country. I would argue that because of the strength of the institution we have a societal obligation to tolerate more risk than the traditional system and invest in the pursuit of ideas that may transform society.”

A faster response to biothreats 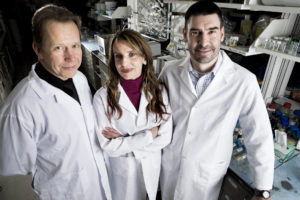 It’s been 30 years since the introduction of the last new class of antibiotics. While bacteria are increasingly developing resistance to existing antibiotics, it can take 14 years and billions of dollars to bring a new antibiotic to market. This project seeks to develop nanoparticles as a basis for the next generation of antimicrobials. It will use machine learning, molecular simulations and biological experiments to streamline the process of identifying promising nanoparticles and developing treatments with them. The researchers believe they can dramatically increase the percentage of proposed drugs that make it to market from the current 14 percent, saving time, money and lives. Led by Angela Violi, professor of mechanical engineering, chemical engineering and biophysics, with six faculty collaborators from engineering, internal medicine, chemistry, emergency medicine and ecology. 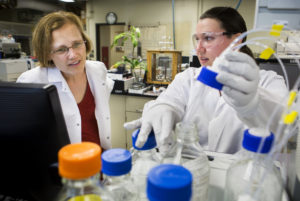 Complex collections of microbes that work together to influence their environments are known as microbiomes. They exist in our bodies, in lakes and rivers, and in urban water systems. Scientists don’t know how these different microbiomes interact. They may do so in dangerous ways as evidenced by the Legionnaires’ disease outbreak during the Flint water crisis. As the water infrastructure ages, the human population grows, and extreme weather taxes urban systems, it’s increasingly important to understand and predict those microbiome interactions to harness their benefits and prevent harm. This project will develop new sensors to gather microbiome data in real time across urban water systems to guide water treatment and distribution. Led by Lutgarde Raskin, the Altarum/ERIM Russell D. O’Neal Professor of Engineering and professor of civil and environmental engineering, with 15 U-M faculty collaborators from engineering, environmental sciences, sustainability, education, infectious diseases and microbiology and immunology as well as collaborators from Northeastern University, the University of Wisconsin, Michigan State University and the University of Puerto Rico. 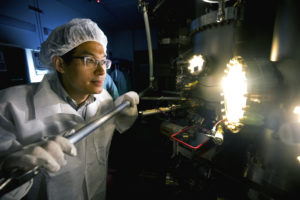 Today’s electronics and clean energy technology rely on the control of electrons—discoveries from the 1950s and ’60s that are reaching their limits. Precise control of quantum particles such as excitons and polaritons could achieve orders of magnitude improvements in efficiency in electronics, lighting and clean energy. The team plans to harness the unique quantum properties of gallium nitride for artificial photosynthesis—to turn carbon dioxide and water into a sustainable fuel. They’ll also use quantum engineering to make an ultraviolet LED that’s 10 to 100 times more efficient than current technology for purifying water, with a high impact on global health. Led by Zetian Mi, professor of electrical and computer engineering, with 11 U-M faculty collaborators from engineering, chemistry and physics, as well as external collaborators from Michigan State University, Sandia National Lab, Lawrence Livermore National Lab and the National Renewable Energy Lab.

Known as the Global CO2 Initiative at U-M, this project will identify the most promising technologies to remove carbon dioxide from the air and turn it into useful products. The initiative aims to reduce the equivalent of 10 percent of current atmospheric carbon dioxide emissions annually by 2030. That’s roughly 4 gigatons that could potentially be converted to concrete and other construction materials, fuels and carbon fiber for use in lightweight vehicles or fabrics, for example. Led by Volker Sick, an Arthur F. Thurnau Professor and professor of mechanical engineering, with nine faculty collaborators from engineering, environment and sustainability, the U-M Energy Institute and the Center for Entrepreneurship.

Blue Sky is one of three new internal R&D funding initiatives the college is introducing as part of its Michigan Engineering 2020 strategic plan. Inspired by entrepreneurial funding models, the levels are somewhat similar to early-, mid- and late-stage startup funding. Blue Sky is analogous to the later-stage, higher-dollar contributions of venture capital. Research Accelerator funding is a one-time infusion of funds to get a mid-stage idea off the ground. It is similar to angel investors or accelerators.

The response to the program demonstrates the need. Fully half of the college’s tenured and tenure-track faculty members submitted a proposal for one of the award categories.